Amy Schumer has made quite the name for herself lately as one of the funniest performers in the world of comedy. But the comedienne and actress has also carved out a space in the public sphere as one of the most well-dressed stars to grace red carpet events.

While promoting her film Trainwreck in Switzerland at the International Film Festival in Locarno, The Daily Mail reports that Schumer worked the 68th annual festival’s photocall on August 8 in a red cap-sleeve dress, speckled with a dainty black and white dot print. While she swept her hair into a soft side braid, Schumer opted for something edgier at her feet, completing her look with fierce red cage heels.

While Schumer’s head-to-toe red ensemble proved to be an equal mix of sweet and sassy, we can’t help but focus more on the sassy part of her outfit — that is, her fiery red heels. The Daily Mail reports that Schumer’s sexy stilettos were the Suede Strappy Sandals by none other than Guiseppe Zanotti. Between their bright color and their sky-high heel, these heels are certainly eye-catching — and so is their $895 price tag! But you don’t have to shell out nearly $900 to achieve Schumer’s head-to-toe look, because we’ve found the perfect pieces to recreate her entire look for less.

To mimic the look of Schumer’s red, black and white printed frock, we found the Don’t Stop Retrievin’ Dress from ModCloth. This dress offers a similar cap-sleeve style while also defining the waist and maintaining a slim, body-skimming silhouette throughout the skirt. For only $35.99, this dress is the perfect piece to begin building our look for less. 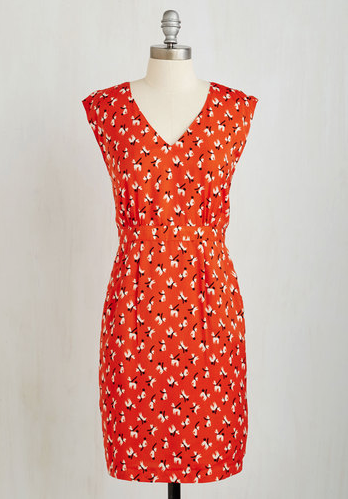 Finding a shoe just as fierce as Schumer’s Guiseppe Zanotti heels was no easy task, but 6pm delivered an equally sexy style with their FunkFresh Red Suede Sandals by Nine West. With an across-the-foot criss-cross strap pattern, these cage heels mimic the lines of Schumer’s heels while offering an affordable price for fashionistas with budgets both big and small — originally $105, these heels are currently available for only $65.99. 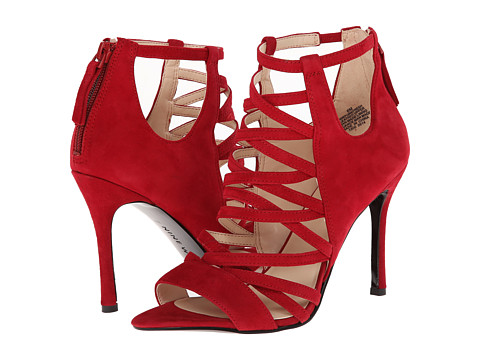 If Amy Schumer’s red film festival ensemble has you scouring the Internet for pieces to recreate her look, consider your search complete. While Schumer’s Guiseppe Zanotti heels retail for $895, our dress and sandal combination totals a mere $101.98. Style your hair in a sideswept braid, and you’ll have effortlessly recreated Schumer’s film festival style for a fraction of the cost.