On Sept. 26, New York City played host to the Global Citizen Festival, which served to bring awareness to issues such as hunger, healthcare and education that affect people around the world. Musical performances from acts such as Coldplay and Beyoncé added to the festival, and so did some of the fashion from celebrities in attendance.

One of our favorite looks came courtesy of Kerry Washington, who attended the festival in what InStyle reports is a black and white lace-up Balenciaga dress, which she paired with a black clutch, grey pumps and Eva Fehren jewelry. Washington capped off her look with a pop of color in the form a slick of orange lipstick.

Although we love the Scandal star’s black and white ensemble, we wish we could say the same about its price. According to The Daily Mail, her dress is part of the yet-to-be-released Balenciaga’s Resort 2016 collection, but similar strapless styles from the current collection start at $1,695 at Net-A-Porter. We love her look, but we think that you don’t have to spend like a star to look like one. That’s why we set out to recreate her entire look for under $100. Read on for the results!

Because Washington’s frock is so unique, we had to opt for a dress similar only in color palette and construction — and that’s where the Color Block Mesh Asymmetrical Dress from Charlotte Russe comes in. Its black and white color block style invokes Washington’s Balenciaga number, but it isn’t even close in terms of price, on sale for a mere $9.99. 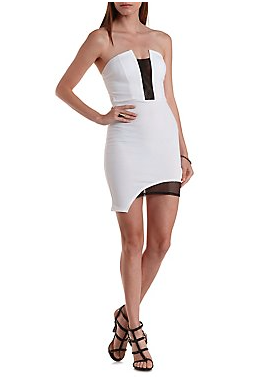 To mimic Washington’s textured clutch, we chose the Urban Expressions Reilly Clutch from DSW. Featuring a tonal faux snakeskin leather, this clutch can easily pass for Washington’s clutch, but will only set you back $29.95.

The Audrey Brooke Sloane Pumps complete our look our less, with their perforated toe box reminiscent of the texture on Washington’s charcoal grey pumps. This gorgeous suede heel will elevate your look to the next level for only $59.95.

Kerry Washington’s Balenciaga dress for the Global Citizen Festival costs an estimated $1,695, but our look for less will give you a similar look for only $99.89. Swipe a bright orange lipstick on your lips and you’ll have taken Washington’s entire look for less.